Giving our Lord St John of Fawsley Commemoration Lecture in Manchester on 9 November, the eminent architect Lord Foster pointed out that although the UK’s design and engineering industries were contributing to infrastructural growth in other countries around the world, the UK itself was ‘missing out’ on tapping this valuable resource because of its short-sighted infrastructure planning strategies: “An optimistic belief in the future, and its embodiment in creating infrastructure for generations to come, is in evidence today but regrettably far from our shores. The common denominator that links our past heritage and emerging futures elsewhere is primarily one of an attitude of mind. It is ironic that one of our prime exports – design and engineering skills – continues to fuel investment and growth globally, while being restricted by the lack of planning, indecision and short-termism in the UK.”

Watch the video of the lecture

WE’RE USED TO THINKING BIG, BUT WHAT ABOUT THE SMALL CHANGES THAT COULD HAVE A POSITIVE IMPACT ON THE WAY WE LIVE?

We’re looking for simple practical design changes in any of the three fields of urban design, architecture and highways/traffic management that would measurably improve quality of life. What small interventions could relatively easily be adopted and have a beneficial effect on daily life?

Entries will be assessed by our world-class panel of intellectuals and design practitioners who straddle the two cultures of art and science.

Deadline for entries: 5pm on Friday 10 March 2017 (extended deadline). It is free to enter. 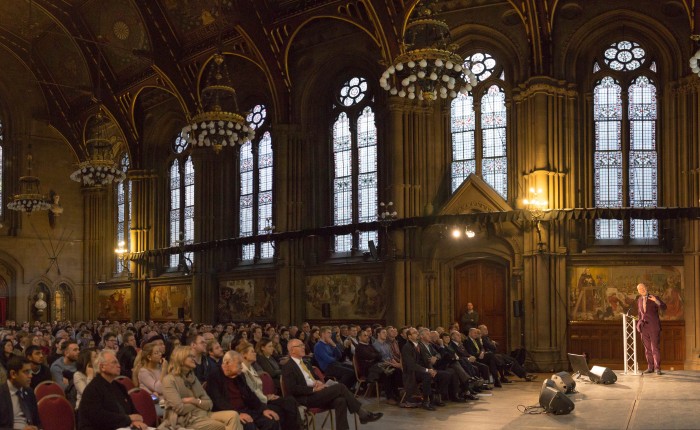 Lord Foster of Thames Bank OM today (9 November 2016) delivered the first Lord St John of Fawsley Commemoration Lecture, organised by the Royal Fine Art Commission Trust at Manchester Town Hall. Entitled ‘Designing the Future: Starting in the North’, the lecture illustrated how the cities of the north, once the engines of the Industrial Revolution, could again drive growth and innovation in the country.

Speaking about Manchester, Lord Foster said: “As the first modern industrial city in the world, nineteenth-century Manchester was highly influential, characterised by intelligent design, innovation and civic pride that encouraged investment in infrastructure. The Victorians were not ashamed to think big; between 1830 and 1850, over 7,000 miles of railway track were laid in the UK – an investment which forms the backbone for our trade and travel until now. This was an era that thrived on connectivity and invested in long-term planning.”

He also emphasised how the UK’s design and engineering industries were contributing to infrastructural growth in other countries around the world, and how the UK was ‘missing out’ on tapping this valuable resource because of its short-sighted infrastructure planning strategies: “The same optimistic belief in the future, and its embodiment in creating infrastructure for generations to come, is in evidence today but regrettably far from our shores. The common denominator that links our past heritage and emerging futures elsewhere is primarily one of an attitude of mind. It is ironic that one of our prime exports – design and engineering skills – continues to fuel investment and growth globally, while being restricted by the lack of planning, indecision and short-termism in the UK.”

His appeal to the decision-makers was to “recognise the challenges that we face as a nation today, and take the lessons from our own history, which have provided a blueprint for growth in the rest of the world.”

The lecture was organised by The Royal Fine Art Commission Trust in honour of its founding chairman, Lord St John of Fawsley (1929-2012)

I first met the lady that I came to know so well, and loved so dearly, thirty years ago. We had lunch together at the River Café, the ultimate repository of dreams and happy mem 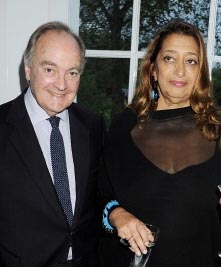 ories, providing food for the mind, body, and soul in the most sympathetic of settings. We hit it off from the start, and how could it have been otherwise? She and my wife, Hayat, had been contemporaries at the American University in Beirut, where Zaha read mathematics. The two of them shared a dormitory, and struck up a lifelong friendship; to which I was instantly and joyfully inducted. Zaha seemed to me, even at that early stage in her career, to be scattering the gold dust of her genius into our eyes, hearts, and minds; or more accurately to those of open mind who were willing to look, listen, and learn a new vocabulary, and gain in the process an exhilarating and entirely fresh perspective into the noble art of architecture.

During the course of that lunch Zaha spoke quietly of the influences that had stirred her passion and her creativity: of visits that she had paid as a little girl with her father in Iraq to the great Sumerian cities as old as time, passing on the way, ancient, free-flowing rivers in the valleys below, meandering, sinuous, and seemingly independent of line; as well as sand dunes constantly changing shape and form from the fierce force of the winds of nature blowing across the desert. She spoke of her time, years later, as a student at the Architectural Association in London under its legendary Director, Alvin Boyarsky; and then the mentorship of Leon Krier, Elia Zenghelis, and Rem Koolhaas, from all of whom she learned so much. At about the same time, the work of the painters Arp and Mondrian; the Supremist Movement in Russia, in particular, Malevich, and that of the great Brazilian architect Lina Bo Bardi, enabled her to expand the boundaries set by those artists in ways that would have seemed to them unimaginable.

This brief reminiscence gives me no time to speak in any depth about Zaha, her acute intelligence, her singular brilliance as an architect and designer; her role as a standard bearer for the equality of women, particularly those in male-dominated professions; and her staunch and unremitting opposition to prejudice in its many forms, from which she herself suffered as a prime target. In all such matters she received a level of worldwide recognition afforded to very few: but despite the fame and adulation that greeted her wherever she went; despite the honours galore heaped upon her, she always seemed to me to harbor the vulnerability of a citizen of everywhere and nowhere, the classic lonely syndrome of the displaced and dispossessed.

From the pinnacle of this time and place, I shall simply remember the powerful, complicated, contrary, combative, and utterly wonderful lady of indomitable spirit and courage, as she was to her friends, – loyal, compassionate, gentle, kind, generous, and oh, so funny: And, more than I can say, I shall miss her voice on the telephone mimicking faultlessly the cockney accent from the district of Clerkenwell in the East End of London where she lived, for the cockney people embodied the qualities that she most admired: loyalty, courage, wit, and direct approach.

Zaha had been unwell for several years, but she dismissed ill health with the same contempt that she reserved for betrayal or prejudice. The spectre of death never crossed her horizon, or indeed that of her closest friends, perhaps because to the latter she seemed always to wear around her elegant shoulders the mantle of immortality.

A few days before she passed away, she telephoned me. “Ello, Peaer”, she said, “Ello Zaha, love”, I replied. “What’s up?” “Nuffink much”, she said, “not feeling too good. Can’t manage them apples and pears any more but hope to see you and Ayat in New York on the fourth of April”. She never made it, of course, but the sea of faces here today to celebrate and give thanks for her life, her unique talent, and the warmth of her all-embracing friendship in St Paul’s Cathedral, the epicenter of spiritual life in the capital City of her adopted country, speak volumes for the love that we feel for her, and always will.